Spring? Are you gonna stay this time? It’s been two weeks since the (in)famous April blizzard of 2018, and get this–no snow in the forecast. Well, okay, no snow where I’m at. They did have snow on the North Shore yesterday. That’s way up north by Duluth and Two Harbors, on the north shore of Lake Superior (get it? North Shore 😀 )

I would add a picture of some spring plants, but there aren’t any yet, at least not here. I don’t have any tulips or daffodils or crocus, but we do have dandelions. They’re not up yet either, but if it stays warm, I’m sure we’ll see them soon. Heck, the trees are juuusst starting to leaf out. Barely.

So, in place of real spring flowers, I’ll regale you with pictures of my very own jungle, er, jungle-ish. Well, okay, not jungle. But they’re green. And plants.

Peppers and tomatoes (and one lonely onion)

The peppers seem to grow more slowly than the tomatoes, so I haven’t transplanted them yet, but that’s on my agenda for this weekend during my breaks from editing.

The onions look like they are almost ready to go into the garden. It’ll be a few more weeks, yet, though. The soil is still cold; even though onions can probably tolerate the cool soil, they won’t grow until things warm up, so there’s no point in making them suffer. They enjoy the climate control in the house! 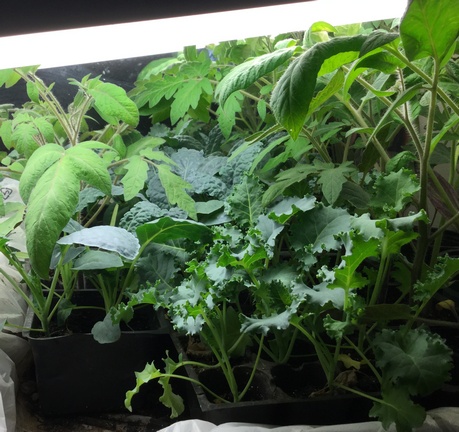 My kale is looking super! And the tomatoes are itching to get some space, as usual by about this time of year. The biggest ones are about 6-8 inches tall. I can only raise my light so far, then I’ll have to rearrange things so the tomatoes can go on a lower shelf while still getting light.

And I’ve got to start my Brussels sprouts. I’m going to put them in the garden a little later, so hopefully the sprouts will be nice by the time we start getting light frosts in the fall.

I’m getting a slow start on my edits. I’m adjusting the story a touch, not too much, but it should make my main character stronger. I use Scrivener, but when I submitted to my editor, of course I saved my work as a Word document.

Ugh. Hmm. So I do my edits in Word, duplicate them in Scrivener so I can compile a clean copy, and before I send them back, I need to let them sit for a bit, then go though them again.

And as with any edits, some are those head-slapping ‘duh’ things. You know, like those pesky adverbs that slip through, or the day’s ‘favorite’ word.

Then there are those things that make you think before deciding how to revise them. That’s the time-consuming part. And the part that can demand a delicate balance when negotiating edits.

This month feels like I’ve had a serious lack of time to get stuff done. It must’ve been the blizzard… Yep, I’ll blame the blizzard.

And one more pic, just because:

I think she’s offering to help me with my edits. Or she just wants her lap back…

Have a great weekend, and may Spring set up shop in your area. Write on!