I’ve been struggling with my WIP revisions. Granted, this would technically be called the second draft, but dammit, I’m just not feeling it.

Then I read Janice Hardy’s post on shifting between drafting and editing. (BTW, if you haven’t spent any time on Janice’s blog, head on over. She’s got an awesome site for writers.)

Aha. Maybe I’m going about this all wrong. Maybe I need to start over, do another self-imposed NaNoWriMo.

“Maybe you just need to sit your ass down and write, love.”

I turn. Gulp. My Muse is in full ass-kicking mode, complete with Indiana Jones fedora and bullwhip, arms crossed on his chest, his blue eyes cutting into mine like lasers. “Ahh, hi there.”

“Sit.” No room for argument.

I sink into my writing chair. I’ve been staring at the screen for the past, well, I’m not sure. I made an inline note in the scene I was having trouble with (a new scene, too!) and moved on to the scene I realized I needed. I thought I had it figured out.

Turns out I thought wrong. “You know, you could break out a new bucket of ideas to throw at the brainstorming wall instead of channeling Harrison Ford. You’re my Muse, so do your muse thing.”

He rests a hip on the corner of my desk, bullwhip curled in one hand. “I have been doing my muse thing, as you call it. Hell, I’ve be trying to shove as much creative fecking energy into you as I can, and what have you been doing? Playing in the dirt.”

“Hey, I’ve got to keep on top of the weeds or I won’t be able to find my vegetables in a couple weeks. They’re way easier to get rid of when they’re two inches high instead of six. Besides, I had to rabbit-proof my garden. Did you see that rabbit waltz right in? Through the fence? I think they chewed that hole. It was like the damn thing thought it lived there.”

“So don’t use a plastic fence.”

“It worked fine last year. And the year before. What happened, did the rabbits have a confab to Ocean’s Eleven my garden? They still got to two of my pepper plants. I think I need a BB gun instead of my slingshot. The damn things don’t even spook when I hit them with a rock.”

“So you got over-confident rabbits.”

“I’ve got oversized, fuzzy, cotton-tailed rodents. And no dog or cat that bothers to chase them. I think we need to get a terrier. They were bred to hunt rabbits.”

“No, they were bred to chase prey into burrows. Rats, not rabbits.”

He gives me his crooked smile, and I fight to hold back a swoon, because that would just encourage him (not that it’s a bad thing; I could use a little eye candy about now). “I’m a Muse. Google has nothing on us.”

I almost sprain my eyes from the roll. “Humble much?”

He leans over, inches from me. “You don’t have anything going on tomorrow, and you won’t want to go outside in the tropical heat, so I expect you to get through at least two scenes. Complete scenes, love. I will be right here, so I can keep an eye on you.”

Before I can respond, he waved a finger. “Ah ah. If you behave, I might even dig up some Schell’s Firebrick lager.”

Not as good as Moon Man, but hey, it’s incentive. “You know, you sure can be annoying.”

“You should know all about annoying.”

Ugh. And of course he’s right. I’ve been having a tough time focusing, and tomorrow will give me a good excuse to stay in the house (yep, 96 degrees with a 72 degree dewpoint. Ick.). I went out to the garden tonight, and wouldn’t you know it, a rabbit was sitting near the garden. I tried to spook it, but it pretty much ignored me until I started chasing it. Then it ran right into my garden. Through the fence.

Seriously. WTF? So I spent an hour adding chicken wire to the side of the fence that had the most rabbit-sized holes. *grumble* Oh, I suppose you’d like to see how things are coming.

The potatoes and tomatoes are looking good, and the onions are starting to take off. Most of the peppers are still intact, thanks, I’m sure, to the tomato rounds I added to protect them. The Brussels sprouts are doing okay, but I found cabbage worms on one tonight. I’ll have to start patrolling. Or cover them, but the trick there is anchoring the netting. Might have to try that this year.

I also promised to show you what asparagus looks like once it grows out. Here ya go:

It has feathery fronds and tiny yellow flowers. Later in the season those flowers develop into little berries that start green and eventually turn bright red.

And as I was weeding tonight, I ran across a couple fat toads. I love seeing toads in the garden. 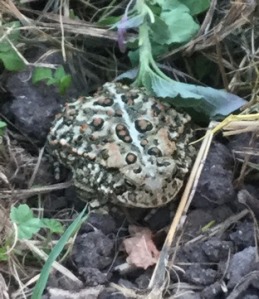 The chickens are still in the “nursery” pen, but we need to move them into the bigger enclosure, hopefully this weekend, then I’ll try to get some pics.

Instead, I’ll close with Zoey chillin’ outside. 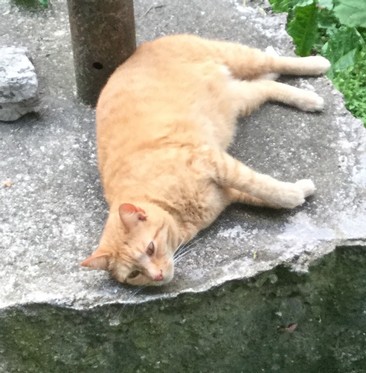 Enjoy your weekend, and get writing–I know I will 😀

18 thoughts on “Revise or redraft?”