Spring. There’s nothing quite like it. I stand outside my writing office on the patio and suck in a deep breath. I smell the green of new grass, of fresh leaves, of promise that winter is behind us.

Yeah. Right. Snow is predicted tomorrow night. Not much, mind you, and a good dose of rain to go with it, but still. It has the effect of dampening the excitement of spring.

“What the bloody hell are you doing, love?”

The edge in my Muse’s voice makes me wince. Consequently, I’m very careful not to turn around.

“Enjoying the fresh air. It’s supposed to rain tomorrow. And snow. This week was icky anyway. Figured I needed to absorb the sun while it’s here.”

I sense him behind me. He’s radiating not anger, but something like agitation. “You aren’t writing.”

I know. The grass practically glows emerald in the sunlight. It never seems this green any other time of the year. The leaves on the trees have a lighter tone, like the newborn leaves are acclimating to being out in the open. Their green is light and delicate. Once the trees are fully dressed, the leaves darken just a bit, like they’re hardening for months of exposure.

“Why aren’t you writing?”

“It’s spring. It only happens once a year.” The spring weather here in MN can swing from low seventies to the low thirties, hence the snow we had just a couple days ago. Granted, snow doesn’t stick around long at this point, but after a week of gorgeous weather, it sure puts a damper on things.

“It’ll be spring for a few more weeks. Sit your ass in the chair and get to work.”

He’s standing close enough for me to feel his heat on the back of my neck. I turn. He’s inside my personal space, and doesn’t back up. His fiery blue eyes cut into mine, and a small shiver of fight-or-flight trickles down my spine. “Back. Off.”

“No. You’ve let your WIP sit for a month.” He waves a finger in my face. “You’ve worked the storyline through and made changes–improvements. Now you need to put those changes in place.”

“Look, tomorrow is supposed to be crappy again. I’m taking my daughter shopping this afternoon. I’ll work on it tomorrow.”

His eyes narrow. “Bullshit. You’re going to do what you’ve been doing for the last month. Not writing.”

I have to look away. Naturally the next thing I notice is his Indiana Jones get-up. Brown pants, tan shirt, and a fedora. A bullwhip is coiled on his belt.

And he’s been so nice lately.

“I need to work through the final scenes before I start the second draft. I’ve got good changes figured out. I just need a little more time. Besides, my readers are supposed to get back to me this week. My agent is back on Wednesday, and I told her I’d have the revisions done by next week.”

He crosses his arms on his broad chest. “I’m going to start riding your ass on this. You need to stop procrastinating. You know you need to have at least the third draft done before your writing sisters reunion. You’re not going to make it unless you dig in now.”

Before I head back to the grindstone, I figured you guys might want a couple updates. And pics. Okay, they’re one in the same.

First, the asparagus. I think I’ll be picking it later today. It’s been cool, so it doesn’t grow much, but doggone it, I can’t wait. 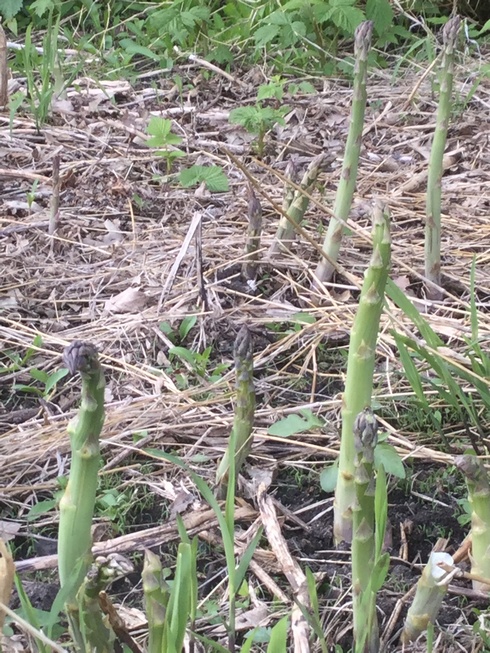 Then, of course, an update on the chicks. I’m telling you, they’re kinda homely.

They freak out whenever we open the top on the box. And they’re getting to the point where we’ll need to move them outside. Not until after this next cold snap, though. My son’s done with school this coming week, so I think we’ll task him with setting up the nursery coop.

I saw a nice bed of tulips blooming yesterday and realized how much the color does to the landscape after months of brown and gray. I can’t wait until the irises and lilacs bloom.

Enjoy your weekend, my friends!